We never did find that elusive ghost town on that long and winding (and bumpy) road, even after going at it from both ways!  Apparently, the "supposed" ghost town is now a part of private property - meaning roustabouts like us can't go see it.  Whatever.  This isn't where the ghost town was, but we liked this gate.  Bears must live behind it 'cause there's bear totems outside it, right? 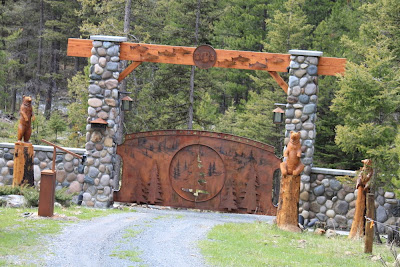 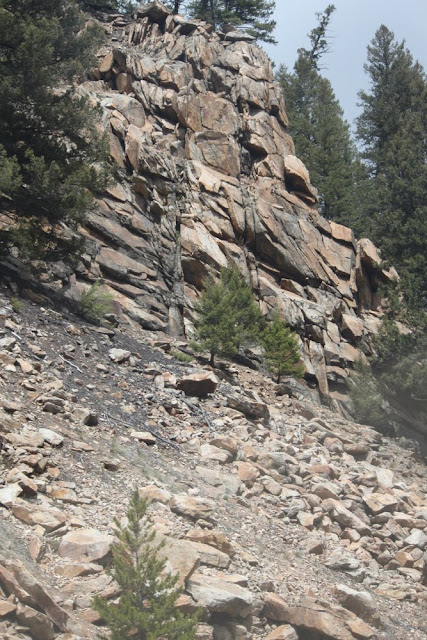 Potential rock slide?  These rocks were pretty scary, but they were nothing compared to what we saw on the road in front of us a few minutes later.  We were so nervous, we didn't even get a picture of it!  What was it, you ask?  A guy in a pickup truck stopped in the middle of the road and aimed a shotgun out his window into the mountains and tried to shoot a deer!  We just didn't think it was very sporting of him to not even get out of his truck!  But since he had a gun and we didn't, we thought it best not to point a camera at him, especially since he wasn't playing by the rules!
More random pics for your viewing pleasure or boredom, whichever works for you. Our version of "almost Wordless Wednesday" - starting now, not another word. 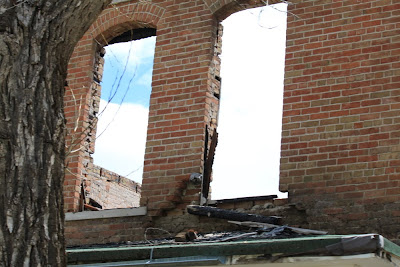 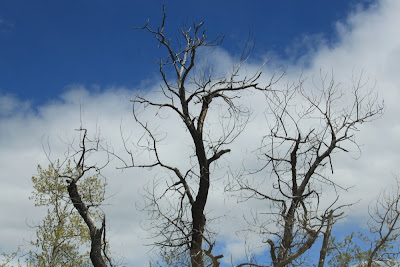 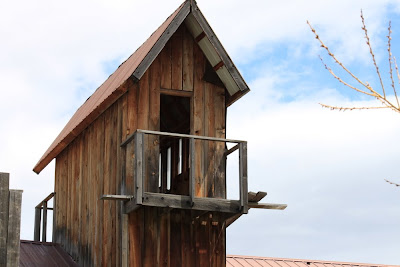 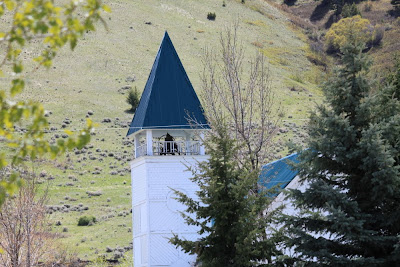 The Road Dogs
Posted by Road Dog Tales at 6:57 PM

Oh, I hope he did not shoot that deer, the meanie. (I woz going to use a different werd but mom would not let me.) We once running into men wif guns wot woz not playing by the rules coz there be signs all over wot sayed "no huntin'" and we commed up over a hill right smack at them. This is why mom always makes me wear orange when we be hiking no matter if it be huntin' season or places or not. And I bet you thought it woz coz I look mahvelous in orange.

NAK and The Residents of The Khottage said...

What great pictures! You make me want to grab Mom and Dad and get them to just start driving me someplace cool!

Looks like a potential rock slide to me, very pretty though! Love the old trees!

Too bad you couldn't get through the gates... but then you may have met a bear!

Too bad you couldn't visit the Ghost TOwn....that would have been super interesting!!!

Good choice not aiming the camera at him, when he fully loaded and looking for supper. Never know being out in them there mountains what you may come across and they don't take too kindly to strangers. lol

Sorry you weren't able to find the ghost town. Will you keep looking? I'm sure there's a ton out there. What state are you guys in now?

I am so envious. I moved frequently until my 20s and I still have wanderlust. Always love the pics! :)

Beoootiful pictures! I am happy dat da guy in da pickup missed his target.....what an idiot.

That second to last picture is very creepy! I think a ghost definitely lives in that scary place!

Super cool bear gate. Would have been real hard not to trespass ;)

Good thinkin on not pointin the camera at the dumb gun guy. Shakin my head till my ears are bruised.

That gate is AMAZING - ive never seen anything like that, it was really cool - thanks for sharing!
Ugh yeah I agree I wouldnt have pointed my camera at that man either!!!

Oh my these are really beautiful and interesting pictures. Sorry you didn't find the ghost town though.
Shooting out of a truck??? How unfair is that. My dad would not like that much.

Those are such great photos. We love going on your trips with you!

Cool concept for a blog! I'm going to follow (get it "follow" BOL) you around :)
Don't expect a lot of comments from me. I'm a furry busy chihuahua. I love reading good blogs, but I mostly interact with my furiends through my Tuesday posts (an "advice column" for the pet community).
Pleased to make your acquaintance,
Twinkie

Thanks for stopping by everyone! And, um, that was not the ONLY person we saw trying to shoot from their car! It truly is the wild west out here and we're just warning ya!
PeeS - this was in Montana, just so you know to wear your orange out here, like Shawnee!
The Road Dogs

'da nerve of 'dat gun man!! Maybe 'da ghosts are on 'da way back to haunt his house!! SNORTS!!

The gate is amazing! How very tempting to peek inside!

What neat stuff you saw on your trip! We sure hope that mean man with the gun was a poor shot. :(

ugh. that dude with the gun in the truck sounds like a total goober face. i hope that deer is a-okay.
that gate is way spiffy! i'd love to know what the house looks like if the gate is that cool looking. maybe you can go back and do a little bit of covert snoopervising? teehee.
*woof*
the booker man

Hey Road Dogs, this is Frankie Furter's Cousin Sarge. You guys have the coolest pix! I absolutely love the scenery. That bear gate is the greatest. It's look great in my territory since I have bears for neighbors. Thanks for sharing such neat places...makes me wanna travel!
Grr and Woof,
Sarge

What a wonderful place to go, you must have the best adventures. Thanks for sharing your pictures with us.
Wags, Dip Bridge and Elliot xx

Okays well it being Montana, I understands. Now, I aaaaaall bouts NOT playing by da rules BUT there be cases when you should. Dat stoopid man...he be like Sara Palin shooting from a helicopter. At least give da animals a chance...duh! Okays, I get offs my soapy box!
Looooves your fotos.

Hi name is Mona. Frankie told Mommy what you wanted to do to help Shelby and the puupies. Thank you so very much.

Heeeeellos...I just wanted to come by and say dat da bracelet furs da auction is incredibly beautifuls ...I had no idea ya'lls mom was so talented.
And dat was awfully nice of hers to let it be auctioned off. Ya'll got good peoples.

Oh, my goodness...
Love reading your blog!
I am so glad I came across it~
Thank you for sharing!
Leticia