Most of us have always been happy to be chauffered around by Mom & Dad.  But, since Cooper came to live with us, he's been whining about wanting a car of his own.  We think it began when he started seeing all these Coopers and Mini Coopers around here.  He just got it in his head that if there was a car with his name on it, then he should have one.  He said something about "destiny."  Anyway, he and Dad went looking at cars the other day, but when he finally got his paws on a Cooper, he decided that they just weren't cool enough for him - what happened to "destiny?"  He also claims they don't have enough "leg" room. Whatever. 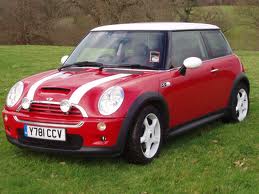 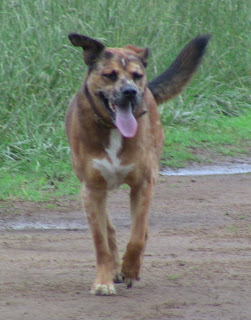 How can I squeeze all these muscles in that tiny car, I ask you? 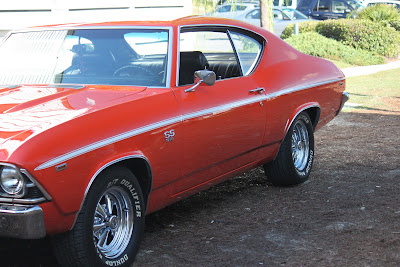 Cooper's Dream Car
Dad says he thinks this has a little too much under the hood for Cooper, but Cooper is pretty adamant that he can handle it.  We'll just have to see if he can wear Dad down. 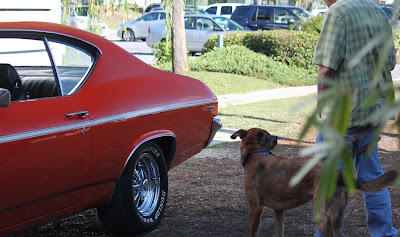 Hey - we have wheels. Ok, we have to pull it with our harnesses and ganglines, but we still have wheels.

Heehee. Mom had a MINI Cooper, and took it out on the track (really), and her instructor was 6'11. And when Mom first saw him, she didn't think he would fit in the car, but it turned out that the guy owed a MINI, and fit in it just fine. So don't let your Dad talk you out of a Mini just because he doesn't think he'll fit! They are deceptively big inside! As for the muscle car, you've got Mom drooling!!! And tell your Dad not to worry - too much horsepower is almost enough... (Hey, Abby and I go to car races all the time - we know what we're talking about!) Keep working on him - you'll wear him down eventually! And when you do, Mom wants a ride (although if Cooper is driving, she'll probably bring along her helmet!)!!!

That is one cool car!!

Oh Cooper Cooper Cooper...takes my word fur it...da parents ain't gonna be budge on da car thingy. Why do you thinks I has a laundry basket.
Howevers, if you dad does...uh, could you tells him I want da mini cooper. I thinks my legs will fit just right in theres.
And you will looks awfully handsome in dat muskel car...with some nice shades on and your head haning out da window.

Oh Cooper, if'n you get that car will you take me fur a ride? We can roll down the winders and let our ears flap in the breeze. OK, well yours can flap and I can pretend mine is flapping.

Cooper, you got good taste in cars my friend!

Cooper, take my Mom's word for it - forget the mini and be thrilled with that Super Sport!

If you get the muscle car, can we have a ride in it? Pleeeeeease!

Cool cars. Mom said she could picture me and Lily in a Smart car. Can you believe it!
Benny & Lily

Woof! Woof! My family likes to have a Cooper too. You are right not enough leg room n its not ideal for our weather here in the Midwest. I vote for that muscle car brrrrrrr. Lots of Golden Woofs, Sugar

ooooo, cooper, it's like a duke's of hazard car! you would look super cool drivin' around in that. :) keep workin' on your daddy, and i'm sure he'll give in!!

pee s -- my toots smell like freshly cut flowers, so no worries. TEEHEEHEE.

Cooper
We really like the mini....but you are a BIG DOG, go for the muscle car!

P.S. Grandma had a Javelin...remember those :)

Well Cooper, I can't help you out with the car, but I am sending you some nice treats and toys - just be sure to share with your siblings!

I'm with you Cooper! Thats a dream car.

You won'ts beeleeve this butt my momma's car in college was da Chev Super Sport just like that one....butt hers was blue (and named Felix)

Her wishes she still had it. sigh.
MinnaK

cooper, i don't think that muscle car is too much to ask for! i can understand about the leg room, although i do not have long legs at all.