Many of you may be wondering why - with a multi-dog household - we couldn't find among us ONE who had the nerve to enter MangoMinster.  Okay - so you're not wondering, BUT we're gonna tell you anyway!

Here's how it played out.  We got an email from Frankie during our brief holiday hiatus saying "hi" and telling us to check out MangoMinster for some laughs.  So we trotted on over and got totally caught up in the excitement that is MangoMinster.  (Thank you Frankie from raising us out of our eggnog-induced stupor.)  It looked like a fun time and we starting discussing among ourselves who to serve up as a sacrifice enter and what category would suit best.  Well, as with all things around here, no one could make a decision.

Aspen and Gracie declared that they were WAAAY too old mature for any such shenanigans. 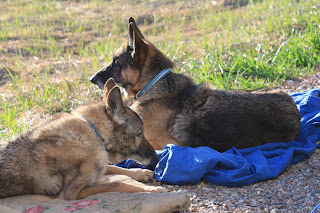 Kayla would be a great Diva, actually IS a great diva, but will rarely show her DIVANESS in front of the camera, so we would have no real proof, just hearsay and conjecture.  Plus, we didn't really think she could compete with the current Diva contestant pool. 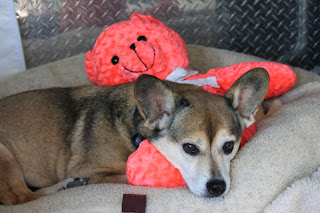 Now, we all know and have incontrovertable proof, that Taz is a BAD SPORT.  Aside from the destuffing scenario, 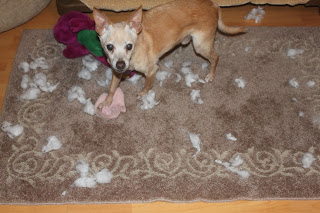 he has regular bouts of "questionable potty habits" but is rarely caught in the act, much less on camera.  He also has been known to detroy and strew about the contents of trash cans that he can reach, but again, never caught in the act on camera. So, once more, no real proof - just circumstantial evidence.  Not to mention the fact that MOM won't hear of her little prince being held up as a BAD SPORT.

He's also a total DIVA - LOVES clothes, eats ON the dining room table, has his own CHAIRS, sleeps WHEREVER he wants, but we just didn't have enough proof on camera and, um, Mom doesn't know how to use Photoshop.

SO - that left Cooper, who - as you know - is younger and more easily manipulated flexible in body and mind.  Then, of course, we were torn between GOOD OLE BOY and CRACKER DOG.

Coop was found in a Piggly Wiggly parking lot in South Carolina - the Good Ole Boy capital of the USofA. 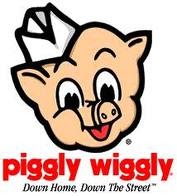 He loves a good tractor pull. 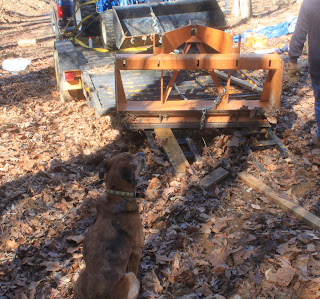 We think he has some pointer/hunter dog in him 'cause he does a version of that crazy pointing stance, um, mostly at tennis balls, but whatever.    Um, no pic of this move.

Then, we were like, yeah, TENNIS BALLS = CRACKER DOG.  That's it - Coop's a CRACKER DOG.  So, we set about getting his entry form all filled out with fine examples of his CRACKER DOGMANSHIP. 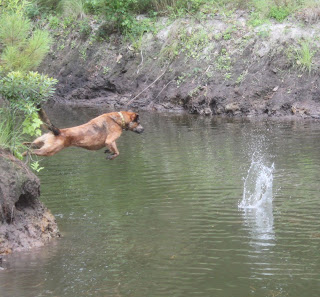 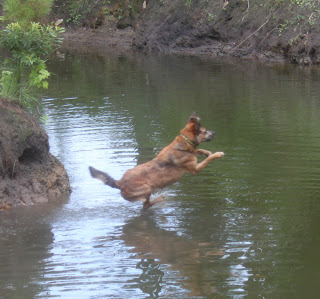 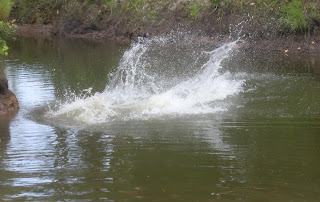 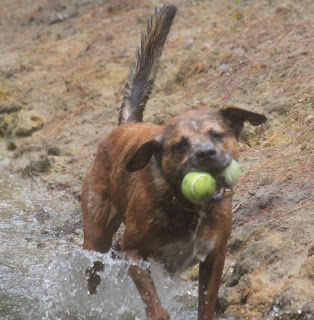 Spazzes out over tennis balls
Then, it hit us - we remembered his debiliating STAGE FRIGHT.  Oh, yeah, the Coop suffers extreme stage fright in public.

Witness this embarrassing display at a local charity dog show event.  Coop was SUPPOSED to be doing a trick - any trick at all AND the lovely College of Charleston women's tennis team supplied TONS of tennis balls - a contest tailor-made for Cooper.  BUT, what did he do?  Did he catch those balls in rapid-fire succession like he does at home???  Well, see for yourself. 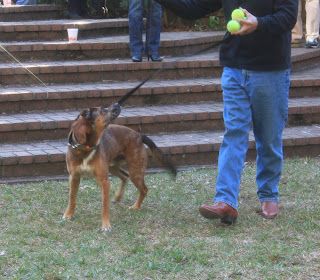 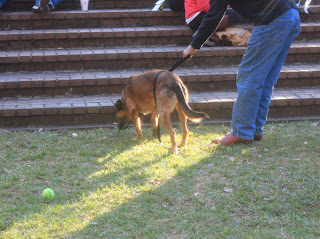 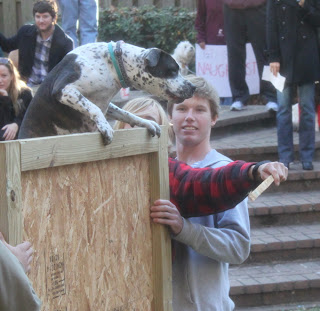 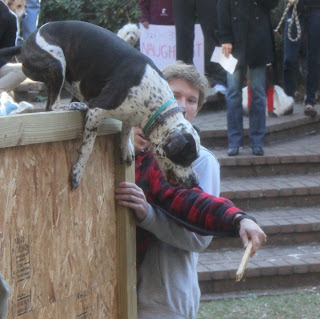 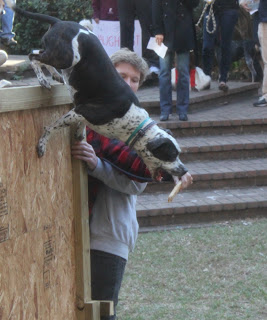 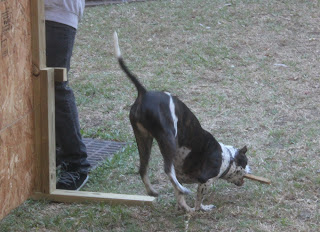 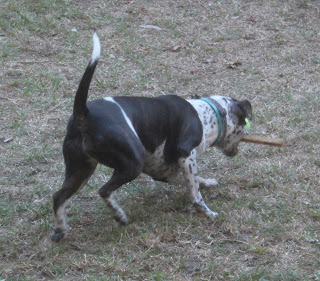 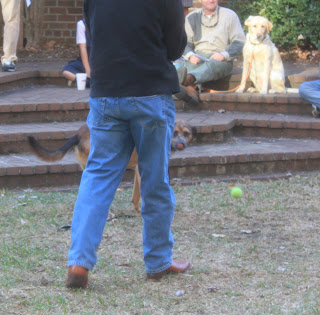 Even that lab looks a little embarrassed for him!
This all brings to mind ANOTHER embarrassment Cooper brought on our family at the local Dock Dogs event a couple years ago.  One could not have THOUGHT of a better sport for Cooper than jumping in the water to fetch tennis balls.  PERFECT!  But, at the tryouts - STAGE FRIGHT!  He got to the end of the dock and FROZE!  Acted like he had never seen water OR tennis balls.  Everyone laughed.  Mom curtsied and, thankfully, refrained from shoving Cooper into the pool, um, 'cause that's against the rules and we think the SPCA was there.

So, while we know he has stellar CRACKER DOG qualities, we just couldn't be cruel enough to subject him to public humiliation.

It's probably all for the best, though.  Mom is soooooo over protective.  She would never have let us go to the Mango Mansion and have FUN!  And it probably would have turned out just like the time we wanted to ride the wild mustangs.  We were all ready for the ride with our boots and bandannas. 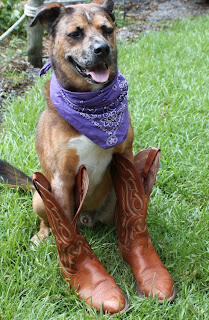 The mustangs were psyched - so were we - then Mom pulled the plug!  What if you get hurt?  What if you fall off?  What if they step on you?  What if they don't come back?  All silly questions in our opinion.  But, hey, she buys the food - know what we're saying?
SO - we guess we will just have to be satisfied with SPONSORING a couple of prizes for the WINNERS!  A cool t-shirt from Furry Twang for Reader's Choice Shameless and Diva Dogs and treats from Never Spoiled, Just Well Loved for Best in Show First Runner Up!

We're looking forward to the excitement of MangoMinster 2011!  Good luck to the contestants!

(Stay tuned for MORE highlights from the charity dog show later in the week!)
The Road Dogs
Posted by Road Dog Tales at 7:57 AM

Funny post! Liked all the pictures, especially the one of Cooper hitting the water! ;-)

Oh well. It's too bad because obviously Cooper would have dominated every category. Maybe that's why your mom kept you out. It wouldn't be fair to the others who could in no way compare to the Coopster.

I hope he gets over his stage fright one day. But good on your mom for handling it with flair!

I'm catching up on your blog, and really enjoyed the great pictures and post--Cooper is one special pup!! :-))

OMD OMD OMD OMD... I am laughin my furs off here!!! Totally Furless now.. thank you very much...it is FREEZING COLD.. and you put up...
THIS POST!!! BaaaaaWaaaaaah BaaWaaaah
I just feel terrible... I missed seeing these ''Incidents'' in pawson!!! Tooooooo funny and fun!!!
You Rascals you!!!

How does ya'll breathes withs all dat suffocation?
Poor Cooper and his stage fright but he has gots some legs on 'em....woweeeee! Be thankful ya'll has no fotos fur blackmail...mum seems to always catch me in da act!

Look at that jump into the water!

I did not enter either coz I do not leave much photografic evidences (of noggty stuffs). I dusn't like getting catched with my furs down. Too bad about the stage fright but how kewl is it to hear your mom say ofur and ofur again "But I SWEAR he does it at home all the time!"

Oh, we understand! We didn't think there was any one category that really defined us this time, and that's okay. We'll be happy to cheer our friends on from the sidelines this year!

I, Lola, was planning to enter in the Diva category, but the internet problems have dashed my hopes there. Perhaps next year. This year I'll root on all the others is all.

We think your round-up was just as funny.

I am cracking ups at "even da Labrador" that looks embarrassed fur poor Cooper!!!

Hey, Road Dogs! We wanted to return the favor and visit you, too! Are we ever glad we did and we're not even woofies. We know about that camera thing. We hear our mom saying "Ohhh, come onnnn" all the time. Doesn't she realize that when we close our eyes for the camera it makes us invisible? Hey, that's the point!
My Sam said, "Wow, ck out the spring loaded legs!" He was right. Never saw anything like that before. Now we're wondering what it would be like to swim. Mom says no. Ok, no it is.
Now even though Cooper didn't want to show his skills with tennis balls, we think he's a "shoe-in" for modeling boots! That's some great leg there, Cooper :D

Sigh. They didn't have a category for me either.

Poor Cooper, Uncle Freddy (who is also from SC)is scared of the camera too. He doesn't really have stage fright, he is just scared of the flash (and flashlights).

We thinks you would have won WHO-foots down, but poor Coop would not have been happy strutting his stuffs in front of the judges.

Signed
Your SC-born Who, Sugar

You has all kinds of "hidden" talents. You jus' choose to keep them....well....HIDDEN. Dat's OK....We didn't finds a cat-a-gory to enters either.