We Would Love Your Help

Hi Furiends!  We've had an idea and we'd sure like your input.  We got super inspired when we read a recent post over at Two Pitties in the City about Wilbur, the island-hopping Pittie.  We fell in love with his relaxed frog pose. 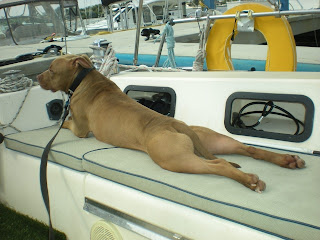 Well, one thought led to another, the way they sometimes do, and we decided that we wanted to create a calendar of Pitties in Frog Pose!  Now, if you're not a Pittie, you might be saying "Whoa, just wait a minute there!  Why just Pitties?!  We do a great Frog Pose!"  But, just hold that thought, 'cause if we can make this calendar happen, we would LOVE to do a Frog Pose calendar featuring any and all dogs.  We decided on Pitties for the first one 'cause we just really wanted to show the lovable, snuggable side of these sometimes misunderstood pups so that lots of people could see it and we thought - aha! a calendar!  Plus, we will donate all the proceeds to organizations that benefit Pitties - rescue, foster, shelters, medical care, education and training.  We've got several in mind, including Bad Rap among others, but haven't totally decided, so if you have a great one in mind, let us know.  We could donate to at least 2 or 3.

Okay, are you still with us???  Here's where you come in right now.  We need a GREAT name for the calendar.  We have already enlisted the help of some of our Pittie furiends and we've got some cool suggestions.  We would LOVE for you to weigh in on your favorite OR to suggest other great names.  We need to have the words "Pittie" and "Frog" in there in some form or fashion 'cause we want the little computer gizmos to find us when they're searching.  As soon as we have a GREAT name, we'll start a blog just for this calendar project.  Then all you Pitties can start sending in your fabulous frog pose photos.  So, even if you aren't a Pittie, you probably know a Pittie and they would love your help!

Here are the names that have been suggested so far (thanks Roo and Mayzie).  Feel free to leave a comment with your fave OR email us if you've got other suggestions about this project.

The Frog Pit (or Pitt) - we loved this one immediately but a frog-selling website has the domain name www.thefrogpit.com, which might be confusing.
Stay tuned for more details soon! And a HUGE SUPER THANKS for your help!

The Road Dogs
Posted by Road Dog Tales at 10:57 AM

A frog selling website? GRRRRRRR That is so not cool! Anyways, pitties in frog pose is way cool. If'n I wake up in the middull of the nite with a name idea, I let you know, k? (I do my bestest thinking while I sleep.)

Love Dogs as Frogs and Bull Frog Dogs. The name thing is tricky, isn't it? We're renaming blogs and making a move to a sole domain, and it's frustrating find a great idea isn't unique.

What a BRILLIANT idea!! The LOTH says she'll definitely publicise it on lostandfond.co.uk for it once the project's underway.

Pitties really need all the good publicity they can get in the UK, sadly.

We like Kissa-Bull Frog as a name - but it doesn't have pit in it. So it might need that for search engines wossisface?

Love and licks (and kissies galore for your great calendar idea), Winnie xx

Hmmmmmmm...the only name we can cme up with is Pitty Frogs......your names are much more cool.

hi road dogs!! what a fantastic idea this is. even though we are a doxie, we fully support pitties getting some much deserved positive attention. the picture you posted is hilarious.

Dat's a great idea. Me be puttin' on my tinkin' cap and see what pops out of it.

It sounds like it's all coming along nicely, and it's so, so great to see such support for pitbulls. I noticed you have 'Bull Frogs', what about something like "Bully Frogs" because they're often called Bully Breed, and maybe a subheading for the search link?

What a gweat idea!I'm suwe it will be a splendid calendaw(I can't do that pose and mommi thought thewe was something wong wif me cause all hew angel doggies used to do it, but I guess my legs just don't want to bend that way), but i di gwess..now as faw as a name, I'm not being vewy clevew, but how about? BullyFwogs?
I do love kissie bulls a lot
smoochie kisses
ASTA

I agree with Dory, we say just Pitti-frogs, That pretty much says it all, bol

he is trying to be like us, a frog dog
Benny & Lily

How excitin this is.

I say Kissa-Bull Frogs. But I is just a Maltie and not a Pittie.

I love this idea! All the names are clever... hard to pick my favorite. :)

Hey great to see you all again, thanks for your visit, just been catching up on your bloggie, love The Original Railroad Dog, he was a cute little feller, I'd like to go on a train one day.
All them folks skinny dipping, when I was on holiday I thought I could sit down in the sea!!heck it was cold mom thought it was very funny how quick I got up!!
That photo of the Pittie is sooo funny, even I can't put my legs out like that, love your idea, as you may know the are band over here, it comes down to them being with the wrong owners, as I know they are a lovely breed in the right hands.
If I can come up with a name I will pop back.
Have a good week
See Yea George xxx

we fell in love w/ the pitties we worked with at Best Friends Animal Sanctuary during our 3 month road trip. we like the name pit bull frog dogs. arf!

pee s -- HA! my 'n asa totally did not get our toesies painted! we would NOT stand for that!! we are wearin' plastic nail cap thingies so we don't scratch our grammy 'n grampy's nice hardwood floors.

Hey Road Dogs!
Wow, what a pawesome idea! I think this is a great thing to do. I like Dogs As Frogs. I'm sure you'll get a huge big response to this!
Grr and Woof,
Sarge, COP

Dogs as Frogs gets our vote! What a super-cool idea!

Mom had a thought today. Turns out it was very similar to Road Dogs!

Anyway, there you have her 2 cents ;)

So Mom's a dolt sometimes :)

what a nice post! you really look great in your photos! keep it up! :)

Hmmm... What about "Kiss that Pittie Frog"? Then again, maybe I've been reading too many fairy tales.