Occasionally, Dad needs our expert help on a project he's working on in North Carolina.  We try to work in a little fun and culture between the work - like our exciting whitewater adventures.  Today, we're going to show you a little bit of art and culture in the area.

Now, we know there are lots of these statues around the country of various animals and whatnot - we've seen Moose in Utah and Trout in Montana and we know there's cows somewhere and lots of others.  But in Cherokee, they have BEARS!  Although these bears were not nearly as intimidating as the Grizzly that Dad tried to chase down with a camera, Cooper was still a little apprehensive.  Here are just a few of the 25 bears that we've captured with the camera. 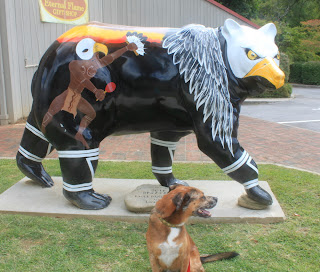 Um, is that a BEAR behind me?! 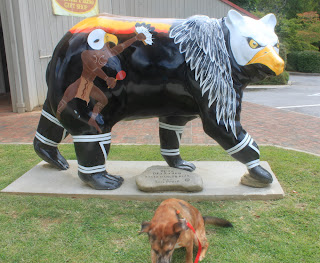 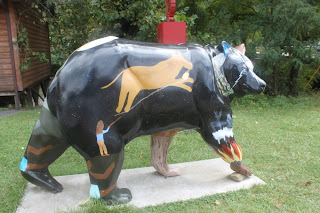 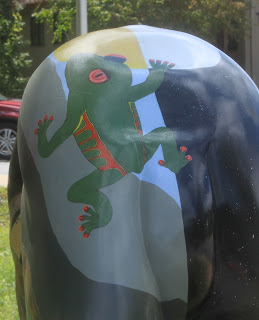 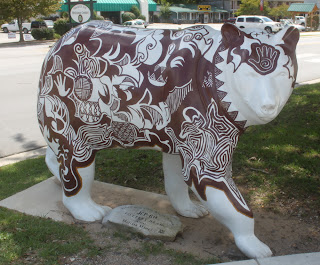 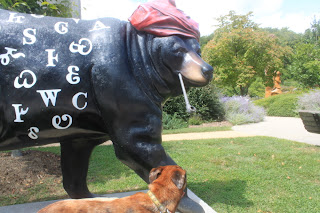 Dude, don't you know smoking isn't good for you? 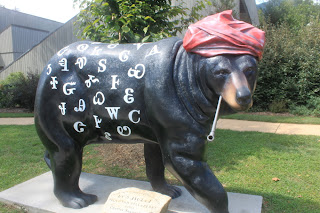 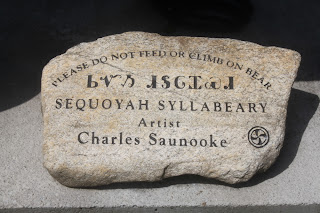 Now, we're not that great with history - all those dates are a little strenuous on our mentals - but Mom's always been kinda fascinated with Native American culture so we decided to take in a little history here.  We were curious about the origins of the names of the Clans around the base of the Sequoyah statue.  So we looked it up and made notes about the Seven Clans.  Obviously, we belong to the "Wolf" Clan!  Cool!


Sequoyah - inventor of the Cherokee  Syllabary 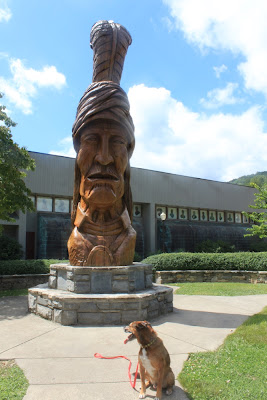 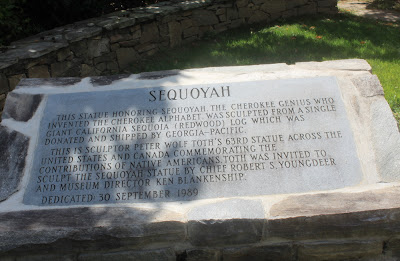 (Make this BIG to read about the Sequoyah statue)

The Seven Clans are also represented on stones around the base of the statue. 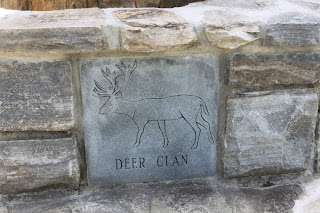 Deer (A NI KA WI), were historically known as fast runners and hunters. Even though they hunted game for subsistence, they respected and cared for the animals while they were living among them. They were also known as messengers on an earthly level, delivering messengers from village to village, or person to person. 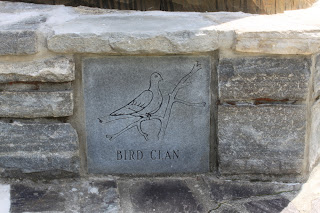 Bird (A NI TSI S KWA), were historically known as messengers. The belief that birds are messengers between earth and heaven, or the People and Creator, gave the members of this clan the responsibility of caring for the birds. 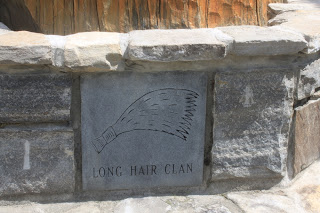 Long Hair (A NI GI LO HI), are also known as The Twister, Hair Hanging Down or Wind Clan. They wore elaborate hairdos and walked with a proud, twisting gait. Clan members are regarded as peacemakers and Peace Chiefs would often be from this clan. Prisoners of war, orphans of other tribes, and others with no Cherokee tribe were often adopted into this clan, thus a common interpretation of the name 'Strangers.' 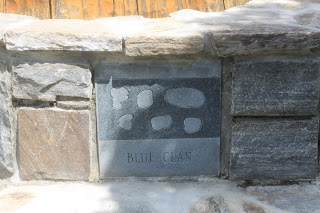 Blue (A NI SA HO NI), historically this clan made medicine from a blue-colored plant to keep the children well. They are also known as the Panther or Wild Cat Clan. 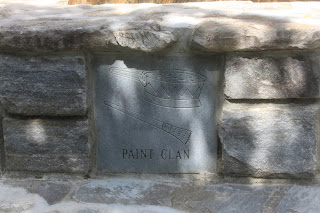 Paint (A NI WO DI), were historically known as a prominent healers medicine people. Medicine is often 'painted' on a patient after harvesting, mixing and performing other aspects of the ceremony. They made red paint and prepared teas for vapor therapy specific to each ailment. 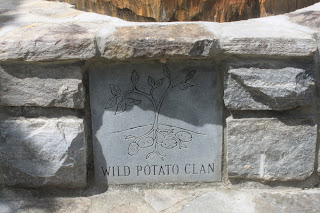 Wild Potato (A NI GA TO GE WI) historically, members of this clan were known to be 'keepers of the land' and gatherers of the wild potato in swamps along streams. They are also known as the Bear, Raccoon, or Blind Savannah Clan. 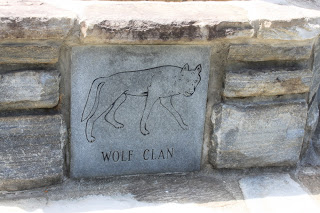 Wolf (A NI WA YAH), is the largest and most prominent clan throughout time. During the time of the Peace Chief and War Chief government setting, the War Chief would come from this clan. Wolves are known as protectors. 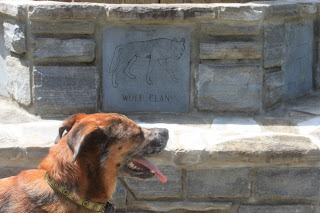 Boy I liked learning all that stuff about clans and words and birds and stuff.

Thanks for all the information, we found it riviting. (Is that how you say something is cool and kept our attention?) cause that is what it did.

Oh what an interesting and Colorful post. Waaaay back in my mom's family tree.. there was a Cherokee Lady. They were a Fascinating bunch... With a sad history.
Love the Bears... Around my neck of the woods... we have HOOOOGE VASES that are all decorated in honor of our Art Pottery history.

Great post today! I love learning about new things and history! Those painted bears are totally awesome, too!

LOVE it, especially the bears. Thanks for sharing with us.

Dis is all some pawsitivly interesting stuffs. Do dey has a....weenie clan???

That is some very cool history! Our Mama is a History buff too (that's what she is doing all her school work for...so she can do history and make green papers for it) anyways...she just loves all this info!!

Hey Road Dogs!
Wow, cool bear art! Love the froggy butt. BOL Over in Harrisburg PA they have steers all over town, all painted fun, but I have no clue what they are all about. Love the Native history info! Great post!!!
Grr and Woof,
Sarge, COP

Oh yea, I just love the bears. Our town had bears on bike last year!

Ooooooo! What a cool post! :D All that info about each of the seven clans...fascinating! And luved luved luved the art bears! So interesting and enjoyable to look at :D Thanks for sharing y'all!

Now I has seen bears in the fur afore but I has to agree with Cooper. Those bears do be shifty looking and I would be so outta there, too!

Those are some cool bears :) We have the same thing here in austin but they are guitars that are painted since we are the music capitol, also hutto is a small town close to austin and instead of bears they have hippos !! huto hippos lol

*we have a new site so please make sure to update your reader :)
http://houndgirl.com/