All They Want for Christmas and Kayla's Adoption Story

Thanks to Frankie and Minna Krebs for hosting this awesome Thanksgiving DOUBLE Post - one post for What We're Giving Our Pawrents for Christmas and one for An Adoption Story.

Okay – here’s what we want to get our pawrents for Christmas, but shhhhh, it’s a BIG surprise (huh, it’ll be a SUPER big surprise if they really get these, hehe).

A vintage Gibson Melody Maker electric guitar – we’re hoping if we get him one of these, he will write a famous song – or at least play better. Just kidding, Dad. We LOVE your playing!  The real reason we want to get Dad one of these is that he had one as a kid and is always looking for another just like the one he had.
[Sidenote to young people – if you have something you really, really like – KEEP IT! That way your family doesn’t have to hear everyday about how you WISH you had kept your favorite this or that. Just saying.]

And here’s the best thing we want to give Dad – 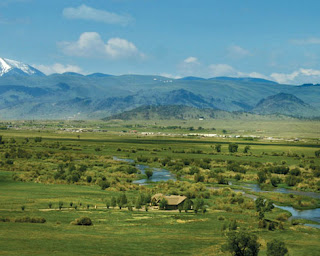 That’s right – his very own mountain with a river (for us to play in)! A BIG mountain – out WEST, not a little hill mountain in the East. He misses the mountains a LOT since we moved to Coastal SC, which is at sea level – um, sometimes even BELOW sea level. We’re thinking if he had his very own mountain, he could go whenever he wanted (and take all of us and Mom, of COURSE!) and we wouldn't have to wear leashes 'cause there would only be US.  Hey, this is a great present for ALL of us!

Our Mom has very simple tastes and she likes sparkly things. We thought she might like this –

And as much as Dad loves the mountains and the cool mountain air, Mom loves beach-type places that are WARM. Now it gets hot as BLAZES where we live and sometimes it’s SUPER crowded with people – it’s a tourist town, after all. SO – we figured she would like her very own Caribbean island where the weather is perfect – WARM but with nice ocean breezes – and no other people, except US and Dad, of COURSE! Again, water to play in and NO leashes.  This works out pretty good for ALL of us, too! 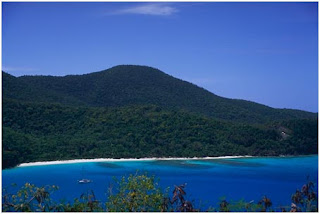 Hmmm, this has a mountain. Dad would probably like this, too!
And we'll need one of these for ALL of us to get back and forth between Dad’s Mountain and Mom’s Island.  We haven't decided, we'll have to take them for a test drive.  We'll choose the one that gets the best gas mileage, of course. 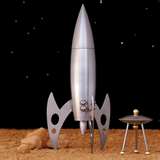 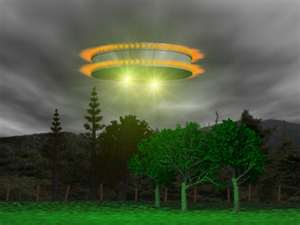 So, whatta ya think? It’s not a LOT of things, but we think they’ll be happy with them. 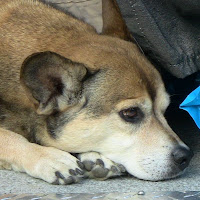 We decided to share Kayla’s story today. Here's how it happened -

Once upon a time, Mom was living in GA and working for a holistic vet (in the office, not as a tech – she’s gets faint at the sight of blood). It was late one workday and the office was winding down when one of the vet techs who was off work that day came in bringing a little puppy that she had found. The tech was in the process of moving and had taken some stuff to the local dump (that's where people throw away stuff they don't want, like food, yummm.  What?  Oh, yeah - the story).

There she found what appeared to be an adult female Shepherd mix under a cardboard box. This pup had met with a very unkind fate (apparently having been shot for some unknown reason). She heard a noise and after looking around, found a tiny pup (about 3 months old) hiding behind the dumpster. The tech figured this must be the "Shepherd's" puppy.

The tech brought the puppy to the office to have her checked out and, hopefully, adopted. The tech took the pup into the office where Mom was finishing up and getting ready to go home. She knew Mom kinda had a soft spot for Shepherds and also that Mom had "SUCKER" tattooed on her forehead.

The pup kept grabbing Mom’s skirt hem with her teeth and pulling and playing. Mom kept saying “No, I’m not taking any more puppies!” Even though Mom and Dad weren’t living in the same state, they each had two dogs. So, when we all got together – we were four. They thought this was probably enough for the moment.

Fast forward approximately one hour from Mom seeing the pup. She’s driving home and can’t stop thinking about the adorable thing. By the time she arrived home, she had decided to name her Kayla. The next morning, the immediately went into the kennel at work where the pup was being kept and changed the sign on her cage from “NEEDS A HOME” to “HAS A HOME.” And, the rest, as they say, is history – or rather, HERstory.

Oh, yeah, Kayla might have had a Shepherd mix for a mom AND she might have brown and black and tan fur, BUT that's where the similarities end!

PeeS - We are out in the boonies pretending we're like the Pilgrims, so we probably won't be able to visit your blogs until this weekend.  We hope you have a WONDERFUL TURKEY DAY!

The Road Dogs
Posted by Road Dog Tales at 5:58 AM

Oh, that is the saddest story ever - who could do that? I am so glad Kayla found you and has a wonderful life. RIP to her beautiful mother.

The island and the mountain sound like wonderful gifts. Can I come visit? I am open to either one - though I am not big on really HOT weather or really COLD weather so we will need to coordinate our schedules.

I hope you are all having a pleasant day being Pilgrims! Sounds like fun.

Those are pretty much the best presents, ever. I can't think of anything more impressive than a whole mountain and a rocket ship to fly on. How do I get on your list?

This story is so sweet and so sad. Her poor mother, just left there like that. I'm so glad your human mother was able to take in Kayla the puppy and that she was left in front a building filled with animal lovers. It could have been a lot worse.

Thanks for sharing your story.

Thanks for sharing Kayla's adoption story... so sweet. :) Happy Thanksgiving!

That's a great story and also quite the Christmas list. Have a great Thanksgiving, all of you!

That is quite a Christmas list, and I think you'd better get that letter into ole Santa so he has time to get it all together! :-)

I really enjoyed Kayla's story! What could have been such sad story had the happy ending because of someone just happening to be in the right place--Fate is a funny thing sometimes, and this was just meant to be!!

Aw Kayla that's so sweet! I've got a similarly soft heart for little furry things in need, hence my zoo, which is up in arms that I haven't shared their stories yet. I wish a wonderful Thanksgiving for your family!

Happy Thanksgiving to you all!

If'n I can come to your moutain and beach, you all can come to the lake is I going to git my mom fur the howlidays! Well Kayla sure woz at the rite place at the rite time! Grate reskoo story!

Happee Thanksgiving and have fun in the boonies
Benny & Lily

What cool items on Mom's and Dad's Christmas list/wants!! I think I'd like a Caribbean island and that guitar looks like it would make great sounding music!! Oh the joy if those things were found under the Christmas tree this year!! enjoyed reading Kayla's adoption story; glad she found such a great home!

Hope your Thanksgiving was a great one!

Happy Thanksgiving! What a sad story with a happy ending. I am so sorry that Kayla's mommy was shot.

Happy Thanksgiving! You, your dog, and everyone else is blessed(including all the other dogs) for being here today for this special time of year.

NAK and The Residents of The Khottage Now With KhattleDog! said...

We hope your travels have gone well!

Hey Road Dogs!
Thanks so much for sharing your pressie list and adoption story. Your list is great!! Just think, your dad could play his guitar on his mountain overlooking a beach and your mom could enjoy her sparkly and sing along. That would get everyone in a happy place! Not sure how to fit the saucer into this, but with everything else I'm guessing there would be plenty of smiles. Thanks for sharing Kayla's story. Glad she joined your crew.
Grr and Woof,
Sarge

Your Pressies are just PERFECT fur BOTH your mom and dad.
Kayla's story is super grrrrreat.

Been reading this blog without commenting but after reading Kayla's story I just had to. Being an animal lover myself, I get emotional when reading such sad tales. Thank goodness for good people like you providing shelter and love to this cute little girl. Oh, the tales she'll tell someday - LOL

I do love this adoption story. It was just meant to be!