We usually Blog the Change about canine issues, but today we're mixing it up and Blogging the Change for Carriage Horses.  We've gotten up close and personal with this issue since we live near Charleston, SC and seen the horses here working under intense heat conditions. 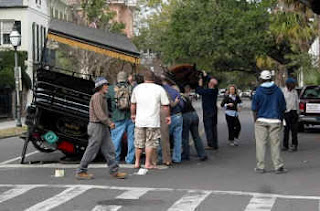 
A couple of years ago, Mom got upset enough about the matter to buy a thermometer and walk around the downtown horse carriage route taking photos of the temperatures soaring to well over 100 degrees fahrenheit.  Then she called the local newspaper and they did a story about it.  Turns out that the location of the "official thermometer" used for determining if it was too hot for the horses to be working was located THREE STORIES ABOVE the city streets where the air is much cooler than the steaming asphalt streets where the horses work!  The city code states that the horses are to be taken off the streets when the "official" temperature reads 98 degrees.  So, while the street temperature might read 120 degrees, the "official temperature" was much less, which technically allowed the horses to remain working.

After about three years of complaints by local residents, the City finally agreed to install additional thermometers at street level for a three-month trial "evaluation" period of time to see if the temperatures taken at street level and the temperature taken three stories in the air differed significantly enough to warrant installing additional thermometers at street level.  They brought in a scientific thermometer company, Rees Scientific, to install the thermometers and had several public meetings about this issue.  Of course, the horse carriage companies were up-in-arms about the change and spoke out loudly about it.  The new thermometers were set to be installed no later than August 15, catching the tail end of the hottest part of Charleston's summer.

Disappointingly, but not surprisingly, the thermometer company pulled out of the project days before the new thermometers were set to be installed.  No one is saying why.  But the carriage companies got their full summer in without interference from the soaring temperatures.

We have similar problems here. There are carriage companies in Chicago who take tourists around the city. It drives us crazy - I can't imagine how frightening the traffic and noise must be for these horses. It gets hot here, too - maybe not 120, but definitely hits 100 in the summer.

Good for your mom for pushing. Maybe next summer things will change.

That is just so not right. We hope that next year brings renewed fervor to fix the problem so the horses can be treated properly.

Thanks for posting about their plight.

More awareness should be brought to this issue!!
Benny & Lily

P.S.: When do I need to get my duck tape photos in? Between my mom's back and the move, I am worried I may not get to it this weekend.

Mom has been there. We live in SC. It always makes her sad to see those horses. Supposedly there are some good companies whose horses get lots of time off, etc, but the summers are very hot here in good ol' SC and it's way too hot many days for the horses to be out.
~Milly and Shelby

That's just not right. Thanks for bringing it up.

That is so horribulls! I like horses, they do be my furrends, but same difference fur any living creature. You knows, if'n peeples would stop riding the buggies, the mean green paper nomming company would lose all the green papers and go out of bizziness and it would not be an issue. Just like pet stores. If'n peeples would stop buying... When will they learn?

While Mommy and I agree that the horses shouldn't be working hard all day when the weather is up in the 100s, we would hate to see companies forced out of business. If that happens those horses are probably not going to go to nice homes. They are most likely going to be sold for slaughter.

Maybe when the weather is really hot you could get some volunteer humans out there to pull rickshaws. Offer free/donation rides and give the money to a local horse rescue. (Save a horse ride a cowboy.) Carriage companies would lose money on the really hot days and eventually figure out that it wasn't worth their time and money to set up in hot weather.

Oh this story made me very sad. I loves horses. Why is it when something is so obvious to everyone that nothing is done? It is very frustrating. Thankfully there are people like yourself to bring these issues to people's notice. I agree that I don't want someone to lose their business but there must be health and safety standards for working horses too. Take care all. No worries, and love, Carol (Stella and Rory).

The cruel disregard for animals over the priority of profits is so infuriating! You must be raging mad about their heartlessness. Here's hoping they set up the thermometers next summer - if not, we'll all be behind you to let them know we think that hey, they should!

Thanks for blogging the change for animals!
Kim Thomas
BtC4Animals.com
CindyLusMuse.blogspot.com

Wow. I had no idea. This is so heartbreaking. Thank you for bringing this important issue to my attention.

This is sad and can only be described as cruelty to animals. I'd love to see some of the company owners out there walking the same route in the heat....pulling a ton of bricks behind them!

Perhaps there's time for people opposed to this to get some thermometers set up at street level to check and see if it makes a difference. Spring time might be a good time to start rallying people to make their voices heard on the subject, too. Good luck getting some change to happen!

Bunny and her mom

Hey Road Dogs!
Wow, I'm so glad you got the bark out about this for those poor horses. Hopefully, peeps will listen up and be more kind.
Grr and Woof,
Sarge, COP

Thank you for bringing awareness to the plight of carriage horses. The lives they lead break my heart.

Good grief! Mom get's sooooo mad when peeps place green papers above the well being of living creatures!!! Arggg! Hmmmm...maybe put the carriage owners in front of the carriages on hot days while the horsies get to ride in the carriage? ;) Just a thought ;D

PeeS: Good for you for taking the initiative to bring these peeps bad behavior to light. Hope another thermometer company with a backbone steps up to the plate soon!

Thanks for introducing me to this issue and help keep up the pressure - those thermometers must be installed! There's got to be a way to get around the carriage companies ... and the politicians who are likely appeasing them. Is it an election year, yet?!

If money was the issue, I know I'd be happy to donate if there was a fund started.

That is so sad about the working conditions of the horses :(

p.s. Thank you for telling me about Pupple Magazine :)

SIGH... Peeps make me SOOOOOO Cross! I think that THEY should be Harnessed.. In DARK CLOTHES.. and forced to pull OTHER... LAZY and STUPID Peeps around.. in the TRAFFIC. WITH NO PLACE TO FIND ANY SHADE!!!
GOOD fur your Mom fur doing that with the temp. stealer thingy!! Too Bad that she couldn't have stuck it where our Dogtors stick them.... in the OWNER of the Company!!! SIDEWAYS NO LESS. I'm just sayin.
BAD PEEPS... Poor Horses!

Sometimes it really hard to got in that kind of situation, but we need to be extra careful for our safety!

Now, not very many things make me mad but THAT makes me mad! Good for you for trying to help those poor horsies. My paws are crossed that someday enough humans will get so upset about this that those horses will get help and not have to work in such dangerous conditions.

Thank you so much for speaking for the horses since they can't speak for themselves.

Road dog mom, I love your activism. Maybe it didn't get done everything you wanted it to this time but YOU DID IT, and if everyone did things like this the world would be a much different place.

How sad... those poor horses. :( thank you for calling attention to this issue.

That sucks. Those poor horses :(
We have a few of those carriages in Portland, but it rarely gets that hot here. We have Police on horseback downtown too.
I hope they have more common sense.