You're not going to believe the awesome pressie Kayla got from BERT for winning his HAT CONTEST!  We could hardly believe it ourselves!  Before we show it to you, though, Kayla wants to say how very honored she is to have won and wants to thank everyone that voted for her.  There were SO MANY wonderful hat pics that she is still kind of speechless that hers was picked and Kayla's not often speechless!  So MANY THANKS!!!

First, there was this awesome Christmas card - isn't that just bee-yoo-ti-ful?  A present in itself, we think! 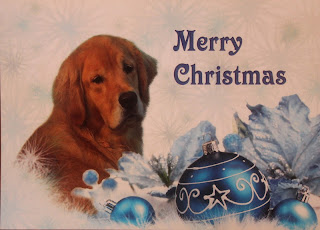 On to the excitement!!! 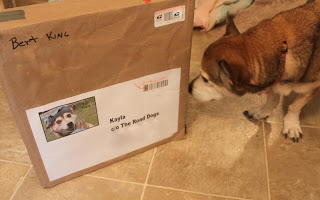 Kayla gives it the sniff test.  "Hey, that's ME on the box!" 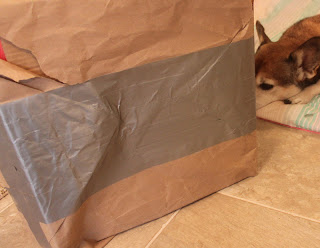 Kayla just wants to point out Bert's EXCELLENT use of DUCK TAPE! 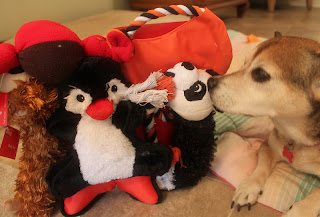 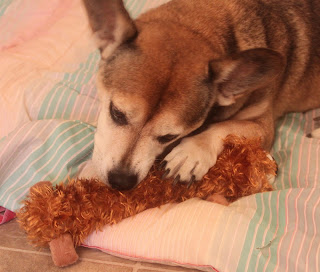 She finally chooses a favorite "baby" to snuggle with 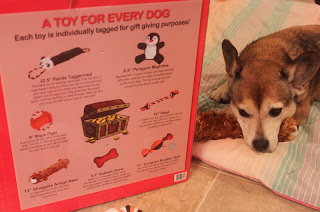 Here's a pic of the back of the box describing all the toys!  See that treasure chest in the middle?  We AGREE - this pressie was just like opening a TREASURE CHEST! 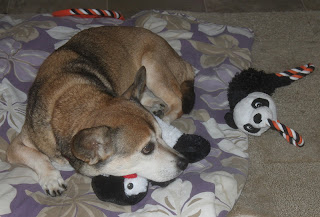 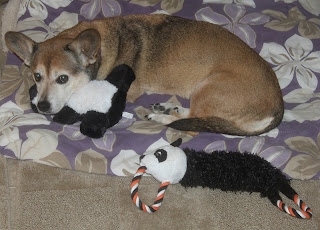 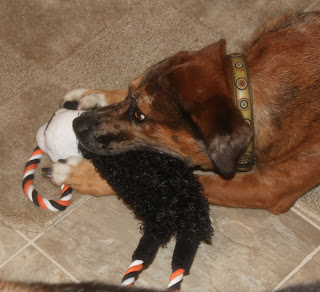 She finally decides to share and Cooper picks a racoon rope toy to chew on.  He has a thing for string!  Don't even ask!

And now - GUESS WHO ELSE Kayla's sharing her toys with??? 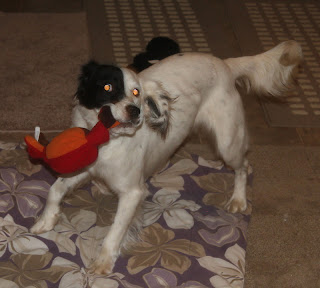 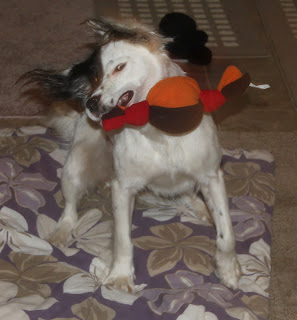 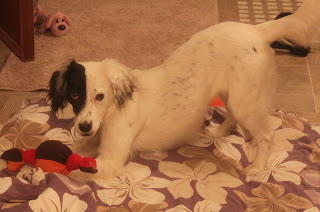 Do you recognize her???  This is Phantom (we call her Lucy). We featured her as one of the adoptable dogs during Mayzie's Rescue Me Home Week!  She has been hanging out at our vet's office while being treated for heartworms.  She's all well now and boy, is she raring to go!!!  She LOVES to play and gets along great with everybody.  Cooper has even taught her to swim!  Now, don't go getting any ideas - we're just giving her a reprieve from kennel at the vet's office until she finds her FUREVER home.  Everyone that meets her falls in love - she has a wonderful temperament and personality.  So, if you know someone who would love to give this cutie pie a home and family, let us know.  She loves to SNUGGLE, too!﻿

It's obvious BERT'S Prize Package was a HOOOOOOGE hit at our house!  You know, we don't think our own pawrents have ever gotten us that many cool toys!  We can't thank BERT (and VICKIE) enough for this amazingly awesome prize package!  You guys are way too generous!!!  THANK YOU BERT!!!

We're gonna have to apologize yet again for our lack of visiting Blogville.  We are missing efurryone so much!  But Mom desperately needs our help with her projects and we're going as fast as our paws can!  Besides the Pit Bull Frogs Calendar (ON SALE NOW!), Mom is hammering and sawing away in her studio like one of Santa's little elves making Christmas pressies that peeps have ordered from her jewelry shop.  So we can't let her get behind with that!  We don't want anybody's stocking to be empty this year, right?!

But, stay tuned in the next day or two for a super special SNEAK PREVIEW of a page from the Pit Bull Frogs Calendar featuring some of our Blogville furiends that you know and love!

Gotta go pour some caffeine in Mom so she can get to work and hope she remembers to give us breakfast!!!

Wow, you hit the mother load of toys for sure. Congrats on your "HAT" win. Sniffs, The HoundDogs

OMD!!!! Toy heaven. Kayla you were fabulous in your hat. Have fun with your toys.
Blessings,
Goose

What cuteness! Sissy is actually overwhelmed when given choices, so we avoid those situations. Strange dog, that one...

Those are sure some awesome toys:) It is nice that you shared with each other.

OMD, I did vote fur you Kayla! Congratulashuns and so nice of you to share that pawsome loot from Bert with Phantom/Lucy (I like Lucy better)!

Congrats! Look at all that good stuff
Benny & Lily

Kayla, we just knew you would share with your family. Glad it finally made it.

I tried to steal one of those to keep for myslef but My Vickie caught me and made me leave it.

But don't worry, I got a big red kong to make up for it later. I think the "Pitty Me" face was too much for her to take.

YIPPEE! I'm so very much happy that Phantom is getting a chance to lives it up at your house! You guys are just the BEST. And Kayla, it was very nice of you to share those super AWESOME AMAZING prize pressies with everybuddy else. But I bet it was kinda hard, huh?

PeeS. Mom wanted me to tell your mom that the bracelets got here exactly on their anniversary day! How about that?

Stop on by for a visit
Kari
http://dogisgodinreverse.com

Wow, what a great present!

Congrats on the pawsome win Kayla! That sure was grrreat of Bert and his Miss Vicki to send all those stuffies. I sure hope that you gots to keep at least one of the stuffies for youself!

Mom says she'd have no fingers left at this point if it weren't for our Kong tugger knot toys! BOL! Kuster has teeth like tiny razors. I'm glad you got such cool loot, and that Phantom is hanging out with you for a while!

Hi Everybuddy, wow oh wow what fabulous prizes. Congratulations on winning. It was a great contest for sure. Enjoy all your playing. No worries, and love, Stella and Rory

What a terrific prize! That was such a great hat photo :D Glad to hear Phantom is all good to go! Great news!