First Day on the Road

This was the first official day on the road, not to mention the first time ever for Dad to pull the food hauler behind us. The day ended with the food hauler mostly in one piece. Now, we're not tattle tails or anything so we'll just say that someone had a close encounter with a tree growing out of the side of the mountain somewhere in Tennesee. The only damage was to the pull-out shade thingy. Unless you count the blinds that got mangled because someone didn't latch a window really good and they were blowing out the window. But we didn't really need those things anyway. At least that's what Dad says. 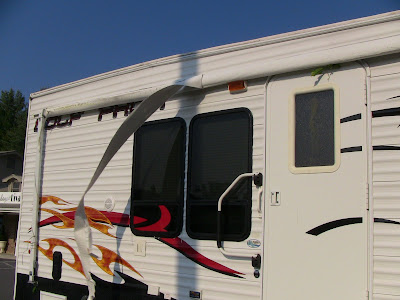 Oops! How did that happen?! 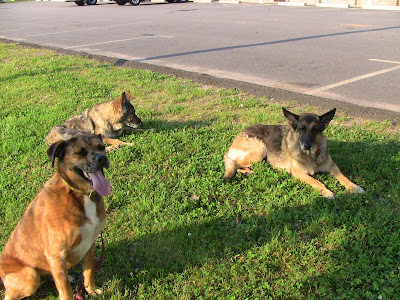 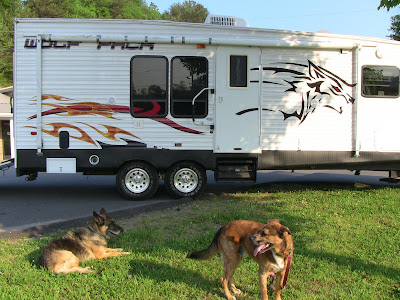 Ta-da! All fixed. Can we go already?!

We were kind of bored today 'cause it was just mainly driving, driving, driving. But, we stopped at a nice Days Inn in Murphy, TN that was pet friendly. We're just kind of following our noses and don't have a real plan mapped out, so we haven't been able to find any really good campsiteswhen it's time to stop for the night. Dad says when we get further West, there will be more places to camp. Mom and Kayla and Taz stayed in the motel room and watched TV and us big guys stayed in trailer to guard the food. Dad says we're ruffing it.
The Road Dogs

Hey there doggies!
This is a really great blog and because of that I don't understand why you don't have a pile of followers yet! Your idea to go on a road trip is unique to all of the blogs out there and I am loving it! I am going to tell everyone to come on over to meet you!
Now, please tell me where you started and where you are trying to end up AND please tell me a little bit more about you (age, rank, serial number) too, if you don't mind!
Please visit my blog to meet a whole lotta dogs and cats who would love to meet you too!

Teacher's Pets - Thanks so much for stopping by! We're glad you're enjoying our blog and thanks for telling others to visit! We're just learning about blogging and getting followers (our Mom doesn't have a clue!) Check back for more info about us - we will post it soon! There is just so much to do on the road.